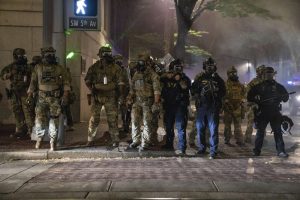 “Federal Law Enforcement Use Unmarked Vehicles To Grab Protesters Off Portland Streets”
— Oregon Public Broadcasting
Trump is deploying federal officers to Portland, and in the last week they’ve shot a protester in the head with a potentially deadly munition, and are now roaming the streets of downtown Portland in unmarked vans and in camouflage, rounding up people and detaining them with no explanation or identification.
These largely peaceful protests began in response to injustice and systemic police violence against communities of color. The presence and the violent tactics of these federal officers have done nothing but escalate tensions.
It’s abhorrent. It’s a terrifying abuse of power. And it has no place in a democratic society.
Enough. We will not be silent in the face of Trump’s attempt to weaponize federal law enforcement to bolster his re-election chances. This has nothing to do with public safety, and everything to do with Trump’s flailing polling numbers.
He already tried this in June when he teargassed protesters in Washington, D.C., for a political photo op. And as Governor Brown put it, “Trump is looking for a confrontation in Oregon in the hopes of winning political points in Ohio or Iowa.”
Senators Ron Wyden and Jeff Merkley, along with members of Oregon’s Democratic Congressional Delegation, have now called for an investigation into the presence and violent actions of federal forces in Portland.
We demand answers, we demand accountability, and we demand that Trump’s unlawful federal agents leave Portland, now.
KC Hanson
Chair
Democratic Party of Oregon