Healthcare for All — up to date news on a single payer solution.

Fix It — Healthcare at The Tipping Point — includes an hour documentary that reaches across the political and ideological divide to expand support for major healthcare reform.

One Minute Video — on single payer. 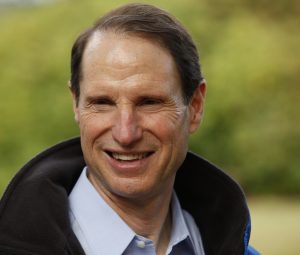 Ron Wyden is a champion for our progressive values — standing up for consumers and the middle class, fighting for digital privacy and an open internet, protecting our planet and Oregon’s special places, and always insisting on human rights and equality for all.

Congressman Peter DeFazio was first elected to the U.S. Congress in 1986 and is now the longest serving House member in Oregon’s history.  As the dean of the Oregon House delegation, he has developed a reputation as an independent, passionate and effective lawmaker.

In 2014, DeFazio was elected to the powerful position of Ranking Member on the House Transportation & Infrastructure Committee, which has jurisdiction over the Coast Guard, highways and transit, water resources, railroads, aviation, and economic development.

Kate Brown became Oregon’s governor at a difficult time for our state. With more than 25 years of service to Oregonians, she was able to hit the ground running – changing the tone in Salem and refocusing the state’s priorities on the issues that matter most.

In just over a year, Governor Brown has gotten real results for Oregon families.  Kate worked successfully to raise the state’s minimum wage and guarantee paid sick leave to workers across the state; increase education funding by nine percent in order to prevent teacher layoffs and keep class sizes from increasing; signed into law a voluntary retirement plan which gives every Oregonian access to a professionally invested retirement account; and put Oregon at the forefront of the clean energy movement with legislation that ends Oregon’s use of coal power.

Ellen Rosenblum has spent her life fighting for and protecting the people of Oregon — as a federal prosecutor, a judge, and as our Attorney General.

As Attorney General, Ellen has focused on standing up for the most vulnerable Oregonians, especially children and seniors. Under her leadership, the Department of Justice child support program secures an average of a million dollars a day for Oregon families.

Tobias Read brings experience working for the U.S. Treasury Secretary, Nike, and a decade as a State Representative. He fought to fund full-day kindergarten and to make it easier for more than a million Oregonians, who don’t get a retirement plan from their employer, to save for their retirements. As State Treasurer, Read will focus state leaders on Oregon’s future by making it easier to save for college and invest in infrastructure.

Read serves on the Oregon Innovation Council which includes three signature research centers and a roster of industry initiatives that create hundreds of jobs.

Get notification of our Hot off the Press, Event Notifications and receive our twice monthly newsletters. Sign up Here.