Outreach with Law Enforcement and Interaction with the Community 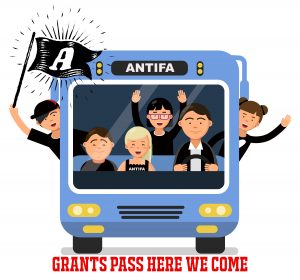 After the “Baskin Robbin Flag Incident” on May 30, in which a large group of citizens felt motivated to take a stance against fake reports of “busloads of ANTIFA” coming into town, one of our members sent letters to both Grants Pass Police Chief Warren Hensman and Sheriff Dave Daniel. She was extremely concerned about having untrained, armed militia citizens invited to “stand side by side” with law enforcement in defending the community, when it is the responsibility of our law enforcement professionals to patrol and protect. This kind of situation is dangerous, not only for these officers, but also for those they are called on to protect.

Law enforcement has the ability to request additional resources, utilizing mutual aid from neighboring jurisdictions, state and federal resources if their own capacity to handle an incident is insufficient.  It is dangerous to call on politically motivated, untrained, undisciplined reactionaries to “defend our community” perched on roof tops, willing to shoot fellow American citizens.

The Grants Pass Police Department and the Josephine County Sheriff’s Department are our well-regulated militias, paid for with our tax dollars, and charged with protecting our community. Although we don’t seem to have experienced any arrests, injuries or deaths related to excessive force, like that which has occurred in other parts of the state and the country, this does not mean we should not educate ourselves on their policies and procedures and provide input on potential improvements to prevent those kinds of issues from occurring here.

Grants Pass Police Chief Hensman called our member within minutes of receiving her communications, and she reports that they had a very good conversation. He has agreed to meet with representatives from the Democratic Party and Indivisible Southern Oregon in the near future to talk about local policing, policies and other concerns. If you are interested in participating, email us at outreach@josephinedemocrats.org.

She has still received no response from Sheriff Daniel.

The Election is Over. Now what?