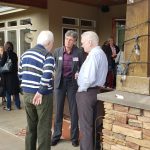 “We need to build those relationships that really strengthen our Democracy…and it’s on all of us,” Jamie McLeod-Skinner told an audience of about 55 people at the Josephine County Democrats’ annual fund-raiser September 28.  She reminded Democrats of what they stand for and related a story about hearing two kids talking about political parties:

“What’s a Republican,” one kid says. “Well, Trump,” the other answers.

“Then what’s a Democrat?”

“They care about people,” was the answer.

She went on to remind Democrats of what they stand for, caring about people, and said Democrats need to listen to others even if it makes them uncomfortable, that it’s ok to have people who think differently in the same party and in the community.  To build the party she said Democrats should listen and respond to young people worried about endless war and climate issues, to the poor, people of color and rural people and build partnerships with these groups to ensure all voices are heard in the halls of power.  She said since running for Congress she’s been on a mission to bridge the rural/urban divide and incorporate their views on issues affecting them such as land management and policies addressing economic disparity.  She reminded those present that people of color make up 20 percent of CD 2, including tribal people, and it’s our responsibility to reach out to them, listen, and get them engaged so they have a voice in decision-making.

Our political relationships and democracy has suffered lately, taken huge steps backward, and it’s on all of us to rebuild, she concluded. [Jamie’s address is at the end of this post.]

In addition to Jamie, KC Hanson, Chair of the Democratic Party of Oregon, said people generally agree with what Democrats stand for.  “Who doesn’t want to leave a better planet for their kids,” she said, then cheered on the Josephine Democrats.  She said they’ve had challenges making headway in such a conservative district but the enthusiasm among those present was encouraging. KC also ran the auction during the fund-raiser, helping to bring in several hundred additional dollars Democrats will need for their campaign to get non-affiliated voters to register as Democrats for the upcoming primary in May, for training, and for materials.

JCDCC Chair Brian Clark opened the presentations with an overview of what the party’s goals are for the upcoming election season. He said motor-voter is convenient, but it’s creating a lot of people who don’t bother to register with a party, and then are surprised to learn they can’t vote in party primary elections.  We have a team who are contacting these voters, he said, informing them about Oregon’s primary rules, and encouraging them to register as Democrats.

Pattie Hanson and Jed Keller hosted the event at their spacious home and the food was catered by Cartwrights.  Anita Savio and Brian headed up the fund-raising effort with the help of Executive Committee members and Bette Mathis. Although there were bouts of showers, Pattie’s large covered patio sheltered most of those attending, and the intermittent sunshine warmed things up.  The event was scheduled from 4-6 p.m. but it was so much fun people lingered awhile talking to Jamie and KC and enjoying the comradery.

Regarding the Supreme Court

‹ FREE TICKETS to Documentary Dance Theatre about the local economy › Time is of the Essence! Act Now! Stop Jordan Cove!