Jamie McLeod-Skinner has challenged Greg Walden to a debate. The debate will proceed with or without Greg Walden, who has yet to follow through on his agreement to schedule debates with Jamie. It will be hosted by Channel 5 of Medford and the moderator is Craig Smullen. The topics will be unlimited and based on the interests of journalists and voters.

3 REASONS TO PHONE BANK FOR JAMIE

1. It will make a difference: Every time to find out a number has been disconnected
or a person has moved, you save the canvassers from wasting time and effort
tracking down addresses. Every time you speak with a supporter you strengthen
their support. Every time you leave a message, it lets someone know, Jamie
has active supporters and they can learn more at www.jamiefororegon.com.

2. It could help put the brakes on catastrophe for America. We see where
this train is headed now—over a cliff. Your phone banking could help
the Democrats win the U.S. House — and stop that train.

3. It will make you feel better (if needed!). Honest! Take that “boo-hoo” feeling about the
state of the world and turn it into “can-do” for Jamie’s Congressional campaign.
She’s brave enough to run against Greg Walden—we can have the courage to
make a few phone calls!

This is reprinted from a Rural Organizing Project email:
On Tuesday, President Trump pardoned ranchers Dwight Hammond Jr and Steven Hammond, at the urging of Representative Greg Walden (R-OR). The father and son were imprisoned in 2012 for arson on public land in Harney County Oregon. They served an 18 month prison sentence. In 2015 they were then re-sentenced to additional prison time under a federal mandatory minimum sentence for damaging federal property. The armed militia ‘Patriot Movement’ used this event to spark the occupation of the Malheur National Wildlife Refuge in January 2016. ROP and human dignity groups and leaders in Harney and Grant and counties across Oregon came together to demand an end to the the Malheur National Wildlife Refuge occupation. Below we share reflections on President Trump’s pardon of the Hammonds:
It is significant that neither Rep. Walden nor President Trump mentioned the very damaging trend of Federal and State ‘Mandatory Minimum’ sentences, which disproportionately falls on working class people, especially people of color.
It is also significant that, while Rep Walden was very public about his personal lobbying for a Presidential pardon in this individual case, he has been almost completely silent about Trump’s ‘Zero Tolerance’ policy towards refugees seeking asylum, and the separating of young children from families at the US Borders. There are currently over 150 refugees being detained in Oregon’s Federal Prison in Sheridan, yet Rep Walden is the only member of the Oregon delegation to remain silent. Additionally, over dozens of immigrants are detained by ICE indefinitely, under inhumane conditions at the NORCOR facility in The Dalles, in Rep Walden’s own District. He has never mentioned the NORCOR facility, let alone sought pardons for the immigrants and refugees detained, despite the fact that hundreds of his own constituents have protested their mistreatment.
The pardon also gives a very troubling green light to armed militia movements and the special interests behind them, who have used the Hammond case to mount an attack on public lands across the West. Ryan Bundy, one of the leaders of the armed militants that occupied the Malheur National Wildlife Refuge two years ago, is quoted by OBP yesterday saying: “Today shows we were right, we went there for a good reason, and our efforts have finally come to fruition.”
During the 40-day armed occupation, militia members intimidated townspeople in Burns, damaged public property at the wildlife preserve, and desecrated unceded land of the Burns Paiute Tribe. They never once mentioned prison sentencing reform, but called incessantly for the privatization of public lands, and repeal of agreements between BLM, the Burns Paiute Tribe and local ranchers. If Ryan Bundy is correct, then yesterday was a victory for vandalism, paramilitaries and threats and intimidation, with big help from the area’s own Congressional Representative.
At the time of the armed occupation, residents in Harney County, the Burns Paiute Tribe and Oregonians across the state took a strong line against the take over and against militias, and continue to do so. This move by President Trump and Rep Walden seems to be his attempt to mobilize the militia, “Patriot” and paramilitary movements for upcoming midterms and to encourage their armed tactics that use threats and intimidation to endanger our communities.
During the Malheur National Wildlife Refuge Occupation, Rural Organizing Project worked with Political Research Associates to put together this guide on the Patriot Movement in Oregon, Up in Arms: A Guide to Oregon’s Patriot Movement. Read more about the history and players in this movement and the many ways that rural Oregonians have organized in response for safety and democracy in their communities.
Rural Oregonians across the state are continuing to organize for a real vision of safety, justice and democracy in our communities: a dismantling of the systems of detention and deportation for immigrants; true economic justice in rural communities with fully funded public infrastructure like libraries and schools; healthcare access for all; an end to mandatory minimum sentences that disproportionately impact low income and communities of color; and a democracy where those impacted are a part of the decisions being made about their lives.

Did you miss the CD2 Candidate Forum?

Did you miss our last meeting where over 100 attendees participated in a CD2 Democratic Candidate Forum??

Read about it as well:

Last day to register to vote in the primary: April 24
Not Registered? Do it Here.
Primary: May 15

Are you a Democrat?? Check Here. Only Democrats can choose the Democratic candidate to oppose Walden.

Now… check out our new Video …

Josephine County Democrats are gearing up for their CD 2 Candidates Q & A Forum on April 10th and thought folks would like an easy way to locate information about the candidates and links to their
Websites / Facebook and other Social Media.

Please click on the link and learn more about the candidates. https://ballotpedia.org/Oregon%27s_2nd_Congressional_District_election,_2018

⇒ Who represents you?
⇒ Are their views and vision for Oregon in line with yours?
⇒ What do you see in a person that represents your Ethics & Values?

JCDCC’s  mission is for “ALL” constituents to  have a place they can go for
non-partisan facts and information.

JCDCC belief is, when folks are well informed, the decisions they make attribute
to positive change in their neighborhoods, communities.

Congressman Greg Walden paid $7,000 in taxpayer funds in a secret settlement with a staff member to resolve the man’s complaints that Walden unfairly cut his hours due to his combat-related health problems. Cody Standiford, the staffer with whom Walden settled in 2013, came to work for the congressman in his Bend office in 2010 after being discharged from the Army.

Read more in the Oregonian article.

In The News/ Walden 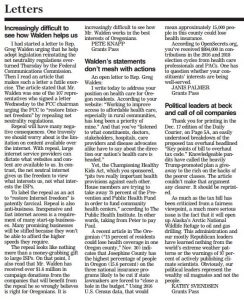 Pizza, salad and soft drinks are included and there will be a silent auction for some valuable items.