Join fellow Democrats/Progressives for 2 hours of wine, locally sourced and prepared cheeses and meats, good conversation, music, and relaxing views. Plus! There will be a silent auction of some outstanding donations for all to bid.

All monies raised will be used to support 2018 Election Activities, Education on local and federal issues, and keeping our office going.

Help us raise money needed to get out the vote and educate our community on the issues. 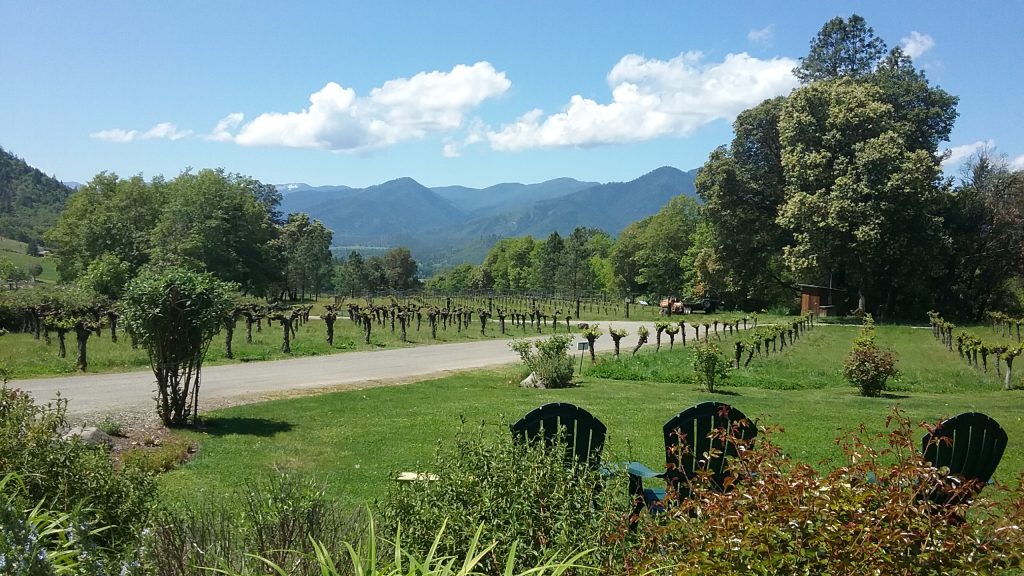 Chris Wig, Chair of the Lane County Democratic Party will be our speaker. As a political organizer and community leader, Chris Wig is committed to expanding tenant protections, building affordable housing, strengthening public safety and creating living-wage jobs in Eugene.

As Chair of the Democratic Party of Lane Party, Chris fights for policies that help working families in Eugene, such as creating earned sick leave, raising the minimum wage and passing universal background checks on guns. As a program director at Emergence Addiction and Behavioral Therapies, Chris helps participants in the Lane County Treatment Court and Veterans Court commit to change and transform their lives.

May Meeting – May 8th – Commissioner Candidates

The next meeting of the Josephine County Democratic Central Committee will be on Tuesday, May 8, 2018. The social time starts at 6:30 with the meeting call to order at 7:00. We will be having a forum with the candidates who are running for county commissioner during that meeting, as well as attending to some party business.

Hope to see you there!

Please come and support Earth Day and Josephine County. The Josephine County Democrats do a road clean-up every three months to help keep our highways uncluttered and attractive. We have adopted a section of highway that begins near Hubbard Lane on Hwy 199. Please bring sturdy footwear, water, gloves, and perhaps a hat as the weather forecast for Sunday is clear and 70 degrees! We need 8-10 volunteers to help out. Bags, litter-grabbers, and safety vests will be provided for you.

From Grants Pass, drive on Hwy 199 to Hubbard Lane (the last light on 199, near the college). Make a left at the light, then take the first right and park in the field to the right.

Please RSVP to chair@josephinedemocrats.org  or call 541-295-8691 so we can get an accurate head count of our volunteers.

Get Out The Vote!

The  Primary election is on May 15th. We need all Democrats and progressives to vote! You can help by making calls and canvassing. We’ll supply the coffee, donuts and pizza! If you have a smart phone, please charge it up and bring it with you. It will be used in the field during the canvassing to download walking turfs and upload canvassing results. It’ll be easy–we’ll show you how.
Email    janj@rogueindivisible.org  or  chair@josephinedemocrats.org  to sign up.
See you there!

Join us at the next Democratic Lunch. Jim Crary, Democratic Candidate for Congressional District 2 (currently Walden) will be the guest speaker.

This is a Change in location! 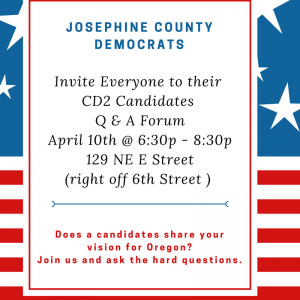 Come one Come All…
Josephine County Democrats would like to invite all interested
to join their April meeting and meet the candidates who are hoping
for their name on the November Ballot to defeat Greg Walden.

There will be a Neighborhood Leader Program introduction and training on Friday, April 13, at 4:00 p.m. at the Unitarian Universalist building at 129 NW “E” St. in Grants Pass. Joyce Chapman, one of the Neighborhood Leader Coordinators from Jackson County will be here to introduce the program, show how it works, and discuss its importance to our winning elections in Southern Oregon.

If we can get our Josephine County Democrats and progressives to turnout out like that for elections, we will be winning elections, even here in Josephine County, especially in non-presidential elections like the upcoming November election. Please come and learn about this important program. Getting out the vote is probably the single most important thing on which we must be focused. Nothing of what we want will matter if it isn’t codified.

March with thousands of advocates and hundreds of scientific organizations who will hold political leaders accountable for passing equitable, evidence-based policies that serve all people and all communities. 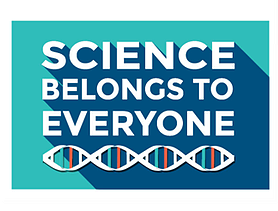 Evidence-based policy is critical to protecting our present and future, yet anti-science sentiment is a growing challenge in the current political environment. It is time for all of us to stand together as science advocates and send a strong message to representatives and policymakers around the world that science will not be silenced, and neither will we.

An informed citizenry is the lifeblood of democracy. But how do we figure out what information is truthful and which news sources are reliable?

Join us as an outstanding group of media representatives and educators from throughout Southern Oregon address these questions and more:

Following the panel, enjoy refreshments and smaller discussions where you can exchange thoughts and ideas with fellow community members.

In Grants Pass and want to car pool?? A group will be meeting at 2:00 PM in the Albertson’s parking lot at the end past Mc Donalds. Fill out the form below and let us know you will be wanting to car pool.

March in Support of Students

Join us in a march this Saturday, March 24, from 11:00-1:00. The march is organized by students seeking common sense gun reform. We will march from the Jackson County Clerk’s Office to Spiegelberg Stadium. It’s time to say enough is enough to gun violence in our schools.