“We wanted to meet with Chief Hensman to learn more about the department,” said Deb Harpster of Indivisible Southern Oregon. “We felt it was important for us to learn what policies and practices our local peace officers are using, and how they engage with community on different issues,” added Geri Ventura, Josephine County Democratic Party member.

The group came prepared with a long list of questions relating to the use of excessive force, militarized equipment obtained through the 1033 Department of Defense Excess Property Program, how they handle calls relating to mental health and the homeless, as well as the local militia presence at community events.

Barbra Villona of Indivisible Southern Oregon asked if the department had implemented any of the “8 Can’t Wait” policies recommended by Campaign Zero as immediate preliminary measures that have been shown in some cities to reduce harm to both civilians and police officers.

Captain Todd Moran, who was also in attendance at the meeting, expressed pride in working for the department. “Choke-hold procedures haven’t been taught at police academy for over 15 years, and we train regularly on de-escalation of incidents, and comprehensive reporting,” he said. “The new laws signed by the Governor after the Special Legislative Session last week will also put additional components into effect as well.”

In the past month, Grants Pass has seen multiple events that have had members of the public on all sides of the political spectrum on edge about the safety and well-being of the community.

On May 31st, there were heavily armed citizen militias posted at the Union Avenue flag pole to take a stand and “protect” the city against false reports of “ANTIFA” looters and rioters coming from out of town in busses. Seeing armed citizens perched as snipers on business rooftops, was of great concern to many in the community.

“Isn’t protecting the community the job of our sheriff and police departments?” asked Ms. Ventura. “I do not feel safe with community members acting as our law enforcement, knowing nothing of their training, experience or motives.”

Following that event, there were also several rallies and marches held downtown to bring attention to the Black Lives Matter movement. Given that there had been rioting and looting in larger metropolitan cities, some were concerned with that happening in Grants Pass.  Fortunately, the local youth organizers had spoken with Chief Hensman prior to the events, and assured him that they would be peaceful gatherings.

Chief Hensman said that having armed militias and citizens show up to these kinds of gatherings can complicate the job his officers are tasked with. Hensman reminded the group that Oregon is an open carry state, so they cannot prevent lawful gun owners from showing up with their weapons. He added that he had also met with members of Liberty Watch, a non-profit branch of the Constitution Party of Oregon as well, and asked its members to consider leaving their long rifles in their vehicles.

By meeting with representatives of the differing ideological organizations, he has been able to keep the community informed and confident that his officers would be there to protect all parties involved.

As the two-hour meeting came to a close, Chief Hensman said “My goals are to continue to build trust amongst the department and the public, remain neutral and keep the peace.” 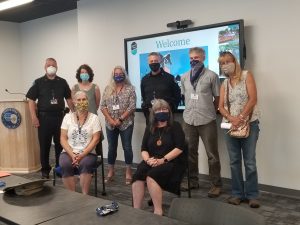